How To Build An Authority Site In the I.M Niche 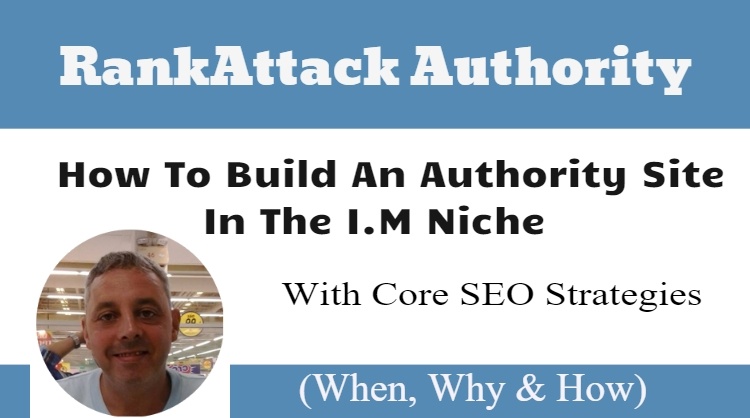 When I first started thinking about doing product creation back in 2010 I connected with a fairly well known 7 figure marketer who at the time had around 50,000 email list and had been around the block a few times.

The first thing that was recommended and taught via a course was how to build an authority site in the internet marketing niche.

I ended up paying this guy to mentor me and the fee was in 5 figure region which I was prepared to pay as I thought it was a good investment to fast track growth in a new business format for me at that time and was intended to pay me back multiple times over and secure my future.

Some things I got right, some things were disappointing and if I was to do it again I would, even though I don't feel that I got a fair deal knowing what I know now, and for the things that were promised but were scarcely delivered.

So why would I do it again?

Simple, it was the decision that I made when I handed over the money, it was a decision I made and a promise to myself that regardless of whether this turned out to be a good investment or not, I was going to do product creation and there was no turning back.

As it happens I am now a 7 figure marketer myself but a lot came from “doing” and not so much from “listening” to others.

In fact, I was a member of a paid group being mentored by another big name marketer and I said at the time that launches and affiliates were not needed to make a full time living and I was laughed at, but guess what...I rarely ever do launches or use affiliates.

One of the main reasons for that is that i have driven almost 3 quarters of a million unique visitors to just my instabuilder pages (sales pages, optin pages, webinar registration pages etc) and using my main blog to host those pages.

That is not blog post traffic, that is traffic to pages within the same domain that have list building or monetization goals. So as far as knowing how to build an authority site in the I.M niche i have a story to tell and strategies to share.

I was right and my business model does not rely on me doing launches or having affiliates and I do just fine. In fact, in many ways, I do better as I am not tied to reciprocating for people and I am not having to devalue my tools and products by selling too low.

I guess some people are just like that, a little hard headed, stubborn and determined enough to pull off goals from sheer belief, and less from taking advice.

One thing I learned pretty early was that having a blog was extremely handy and could be used for multiple benefits. I’m not talking about just about getting rankings for traffic but I am talking about somewhere to put down bits and pieces and ideas about your journey, strategies, and thoughts.

None of this happens overnight of course and it really is a journey that you direct yourself, but what I can do is speak honestly and share ideas on BUILDING AN AUTHORITY SITE with multiple goals and multi-purpose in order for you to build something similar long term.

So after doing a poll in our very small Facebook group where the preferred topic of my next course was for core SEO and authority site building I have decided now is the time to do this.

I did jump ahead and quickly do the RankAttack PBN course first as I felt it was needed in the RankAttack course series, but that was completed in 3 days and now I am focused on RankAttack Authority and teaching how to build an authority site at low cost that brings in traffic without affiliates.

I am not sure if its a coincidence or not, but my overall earnings in zaxaa which i use when not doing sales pages with affiliate promotions or for launches is also at 3 quarters of a million.

That doesn't include any launches i have done on JVzoo. Warriorforum or Warriorplus which would be around $500k revenue, and also doesnt include any affiliate promotion revenues from my promotions for other peoples products which are now consistently 4 figure commissions. in fact 9 out of the last 12 promotions have been within $2000 to $4,500 commissions range.

The course will cover:

There will be some crossover in parts as we have done some existing courses for, Adsense sites Content SEO and the RankAttack SEO system of ranking with zero backlinks, I will have to include parts of those courses where those strategies are needed in building an authority site.

However, the main focus will be on the core SEO site setup along with Authority site building basics, shortcuts and ninja tricks to speed up your growth.

These strategies can be used in any niche but I will be doing it within the internet marketing niche with a brand new site.

The truth is that it's always best to create these type of sites in niches that you understand and have a massive interest in. Whenever I do sites in niches I have limited knowledge or interest I just find it harder to stay motivated enough and I am guessing that this is the same for many people.

It's one thing to get content created for you but for a truly great authority site you really need to have a massive interest and that needs to be about something you can talk about all day every day and never get bored with.

The course should take 2 days recording and the third day to add bullet points under each video. There will be some twists and turns and as always an evolution as I build something from scratch.

The goal is to build an authority site in the Internet marketing that builds an audience, makes money and brings in repeat traffic. I will also be avoiding SEO tutorials on that site so as not to clash with my main anthonyhayes.online blog.

With new plugins, technologies and traffic sources this could be a lot of fun!

Keep an eye on upcoming affiliate promotions that I will be emailing over the weekend as I will be offering access to this new course on how to build an authority site as a bonus for a limited time, after which I will charge $197.00 for the course for those that miss the bonus opportunity.