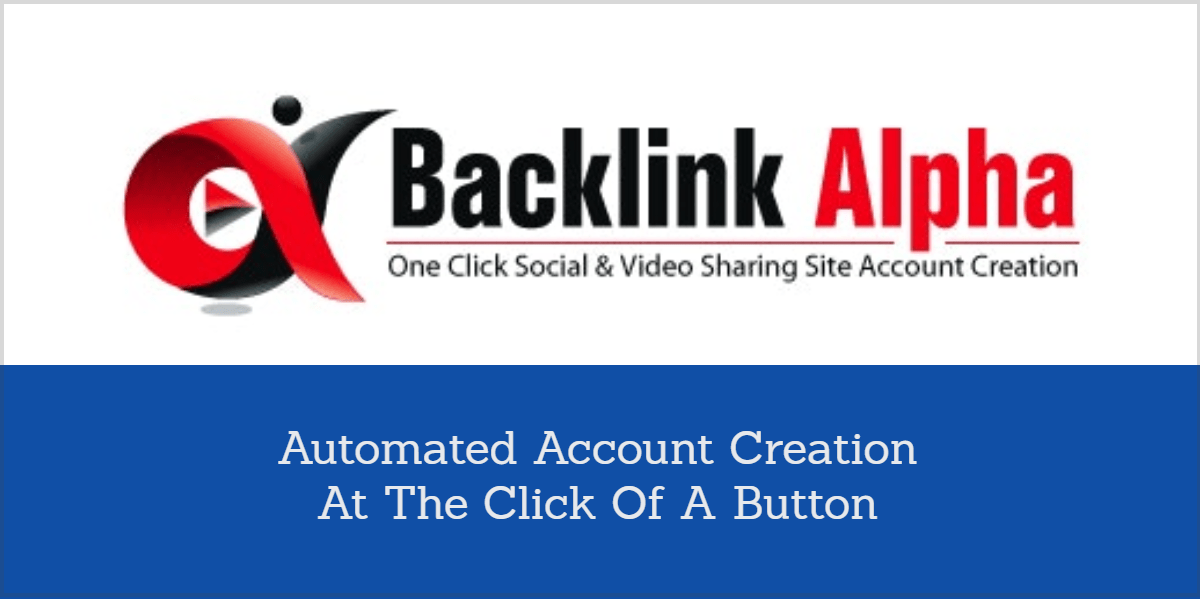 For the past 5 years we have been creating top quality tools for account creation and syndication and until recently we charged just a one time cost.

That’s less than some inferior tools cost per month!

The time has come for us to enter the market where we charge a proper monthly recurring fee for the account creation tools and add some awesome new features... But don't worry, if you already have ANY Alpha SEO tool then you will not lose your account creation features, those account creators will stay and be updated periodically as they are now.

Today though we are releasing Backlink Alpha and this is a new account creation tool that will be updated more regularly and have some additional great new features to improve success rate.

Backlink Alpha Has Unlimited Account Creation and Posting Features Including:

Tool Will Be Updated Twice Monthly

As sites implement bot control measures to prevent bulk account creators (and many have large budgets, much bigger than ours) it is inevitable that we need to update more often to maintain a high success rate in account creation.

By doing regular updates every couple of weeks we can maintain the tool better and get better results for everyone and for ourselves as i use these tools a lot too.

Al your automated account creation done on the desktop tool is analysed server side and we provide you with your very own Web App dashboard to get an overview of performance, costs and more in depth analysis of why accounts might be failing.

You might find that email domains have been blacklisted, that captchas are not performing, errors with proxies and more.

Whatever the issue is its captured and reported here for you to improve the success rate of massive bulk account creation.

IN DEPTH ANALYSIS FOR ACCOUNT CREATION WITH BACKLINK ALPHA

Ability For You To Add Your Own Email Servers

We Have Added the Ability For You To Add Your Own Email Servers To Increase Your Success On Sites That Have Strong Bot Control Filters.

This is another measure to increase success rate and this is yet another ground breaking software feature from our team.

This one is particularly exciting as you are now able to add your own domains to make your own private email servers in just a few clicks and you can use low cost TLDs or higher cost .com, .net etc.

It's entirely up to you to use this or the domains that we provide, but your own domains will improve your account creation success rate as the generic domains tend to get blacklisted quickly on some sites as we have thousands of people using them daily, creating 10's of thousands of accounts.

Automated Backups Of Your Accounts On Server

Of course this comes with higher server costs and maintenance, but its something we have been wanting to do for a long time and with Backlink Alpha this is now possible

ALL YOUR ACCOUNTS ARE SAVED AND BACKED UP ON THE SERVER

Ability To Choose Which Sites To Use In A Project

Ability To Choose Which Sites To Use In A Project... (Example If You Want To Use Only Tumblr Or Weebly From Account Creator In A Web 2.0 Posting Campaign )

Another example that i have been using personally for the past few days is to export only Daily Motion accounts from my bulk account creation and use these for keyword poking and then take my ranking keywords and add them into my wordpress traffic scout sites to determine how much traffic they have.

This does two things for that strategy.

1. I create less WordPress Posts with Traffic Scout and the content i produce is used with ranking keyword clusters

2. I get more accurate Traffic data by adding this incredibly simple but highly effective extra step into the Traffic scout keyword poking strategy.

When Saving Accounts You Will Have The Ability To Save By Sites...

Or if you want to export a specific set of bookmark or web 2.0 accounts into the posting tools in Backlink Alpha you can do this easily and quickly.

This allows you to expend on your SEO strategies using the power of specific sites for specific purposes.

Being Able To Check If Accounts Are Still Live From Your Account Creation With Automated Deletion Of Dead Accounts Built In.

This is another feature that we have wanted to add for a long time but again we were restricted with development and maintenance budgets.

With Backlink Alpha those restrictions are gone as we are charging monthly just for these types of features to be implemented and maintained.

The software will check either on demand or after each posting run for any dead accounts and will automatically remove them from your accounts so that you have a more accurate view of how many accounts you have for each site.

Able To Check If Links Are Live From Web 2.0 Or Bookmarking Posting Campaigns AND Also The Ability To Import From Video Synd Alpha Or Live Stream Alpha Campaigns

Want to know if your bookmarks, web 2.0 video embeds or Web 2 blog posts are still live. This feature will check for you and you can see at a glance if you need to add more.

You can also import your links from other tools such as Live Stream Alpha and Video Synd Alpha and see at a glance what your live links status is allowing you to run much more efficient SEO campaigns.

Yet another new feature that we have wanted to add for a long time and we get to do it with Backlink Alpha.

You can drop the expensive monthly recurring indexing costs and instead use our own built in Indexer. Its all built into the cost of Baclink Alpha.

I have designed some super fast indexing strategies on the back end which we are keeping secret as we do not want them copied.

This is multiple strategies built into one indexing tool.

What To Do Now

during the early bird pricing.

These prices will double after a couple of weeks, so you need to be quick to lock in at these super low prices today!